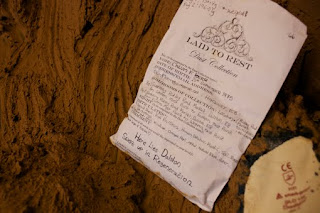 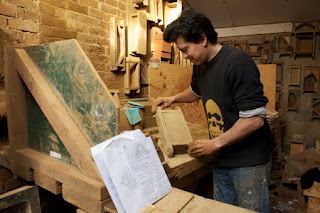 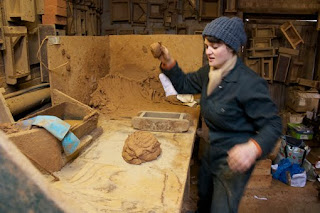 The first 211 bricks were made last week at H.G Matthew's, me and my good friend Mike spent three long, cold, hard days at the brick yard, mixing each dust sample into clay and transforming them into bricks. Each brick was imprinted with the initials of the persons dust it contained. I have been planning this act of absurdity for many months and it was very satisfying to finally be mixing each dust sample into its own individual brick. Me and Mike inhaled a lot of dust over the course of the week and managed to reach our target by day three, finding our rhythm at the end of day two and becoming intimate with "The Brick-Makers Dance" which is best performed to jungle music! 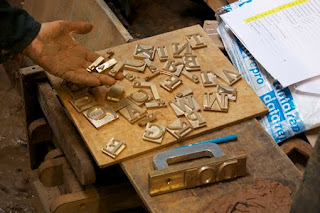 The 'Brick-Makers Dance" was something I noticed on an earlier visit to H.G Matthew's, witnessing the guys at the yard perform a kind of jig in the process of forming and throwing bricks. The repetative nature of this process is also one of precision and accuracy that needs a certain rhythm and at this time of year its cold out there so you have to keep moving to stay warm. The irony is the guys that perform their dance each have their own style but don't even realise they are performing it. If you suggested to them that they were dancing they would probably be horrified. For them it is a way of survival and avoiding repetative strain injury, in this grueling procedure of strength and monotony. 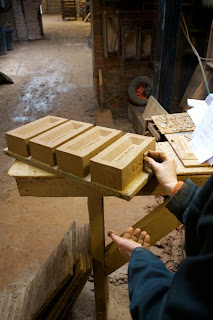 My observations of the dance have been a great source of inspiration and will be informing the choreography for the dance perfromance that will ensue around the brick when on display at the Wellcome Collection. 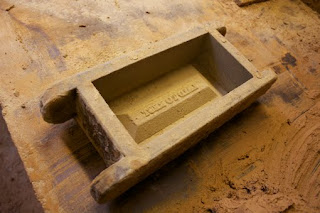 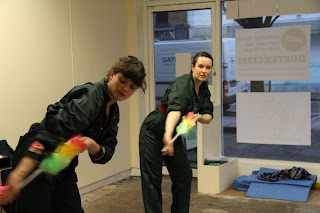 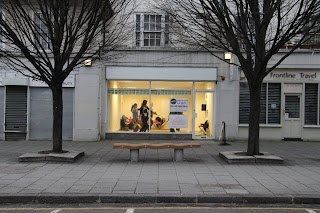 Dustercise certainly proved to be a good workout for me and Rosie last week. As we worked up a sweat to a series of cleaning related tracks, from "Car Wash" to more dirt themed songs like "Smells Like Teen Spirit". No.24 Chalton St certainly saw some eager Dusterciser's feel the burn especially during a hard push through the squats and hoover lunges of "Thong Song".
This was good preperation for the week of brick- making I had ahead of me, performing biscep curls with a duster weighted down at either end was surprisingly efficient for developing some essential upper body strength for the task ahead. 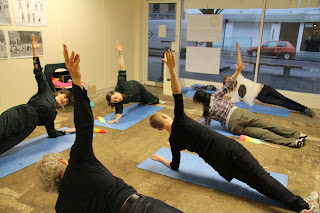 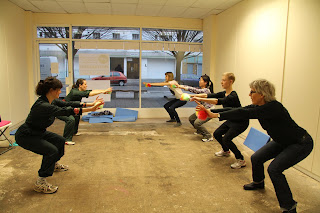 Posted by Serena Korda at 16:22 No comments: 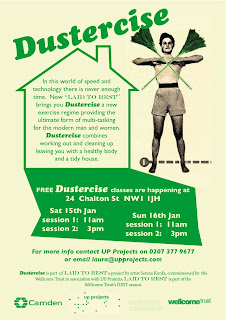 Forget all those other New Year resolution exercise classes, none of them can beat Dustercise!
This is a unique exercise regime combining working out and cleaning up. The ultimate in multi-tasking for the modern man and woman, leaving you with a healthy body and a tidy house!
Free Dustercise sessions are taking place at 24 Chalton St NW1 1JH, neareast tube Kings Cross.
Sessions are taking place on Saturday 15th Jan and Sunday 16th Jan, the class lasts 45 mins and will start at 11am and 3pm on both days.
Look forward to seeing you there!

Posted by Serena Korda at 13:36 No comments:

When I approach people to collect dust for me, I often get asked, How?
Here is a short clip made by Martha at Wellcome Collection demonstrating how I've been collecting dust over the last few months.
If not dusting something delicate my prefered method is a dust buster as it collects efficiently without disturbing large amounts of dust into the atmosphere causing you to choke. For more delicate objects I use a large sable brush, and when a dust buster just isn't allowed I use a trusty dust pan and brush.
Posted by Serena Korda at 04:50 No comments: 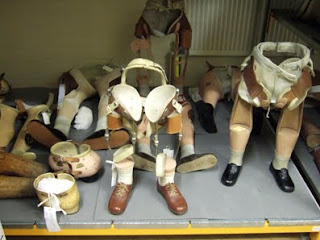 Rebecca opened the door to B34 and there in front of us stood two pairs of children’s prosthetic legs, both sets had shoes and socks on, with harnesses that strapped to the body. Two children circa 1970: without bodies. Their proud stance allowed us to imagine what they may have looked like. We stood at the door not really wanting to go in, uncomfortable as we were unable to ask these semi invisible guardians for their permission to enter. Our chilling silence was broken by some nervous laughter and Kate walked through the door. I didn’t go straight over to the children’s legs, Kate drew our attention to one of the limbs she recognised from a previous visit to the stores. It had been owned by a roofer, who had mended it himself over the course of his lifetime, using bitumen left over from jobs. It was caked in layers of black tar that looked a bit like burnt treacle with glistening jet stones embedded in it. This limb was the crudest of the others that lined the shelves. Most had been beautifully crafted out of wood and early plastics, their rendering highly accurate and realistic creating a sense that we were surrounded by a room-full of sleeping limbs abandoned by their owners. Each one with the potential to spring to life and move around the room, but only once we had left it. 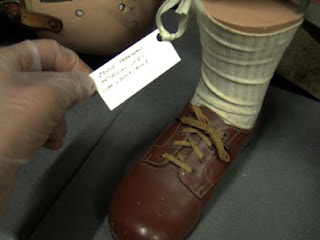 As we moved through this building there was a prison like quality about its labyrinthian corridors and enormous steel doors, all coated in a thick layer of light ochre paint. There wasn’t really a smell in these corridors; which had once belonged to the post office, however, certain stores had particular smells evocative of the objects they housed. When entering store B49 we were hit by a pungent waft of fluoride not surprisingly as this was housing a collection of dental objects. I dusted a twice life size plaster model of lower human teeth illustrating decay in European races as determined by Professor V. Suk, c. 1920. As I carefully moved my brush between these giant teeth I was reminded that I needed to go the dentist. There were other dental models dotted around the room, as well as an array of leather upholstered dental chairs, all equally as uninviting as the next. I started to feel a dull pain in my bottom left hand molar and knew it was time to move on. 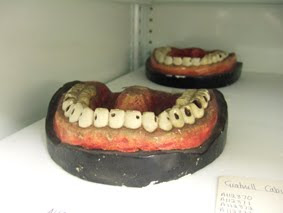 Leaving Blythe House I was struck by a strange and unsettling sense that these inanimate objects had some how left their mark on me. Although I had been wearing a boiler suit, mask and gloves remnants of the dust I had disturbed seemed to be clinging to me: I felt a sense of urgency to get home and wash. 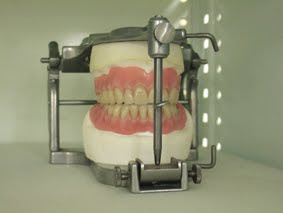 Posted by Serena Korda at 04:32 No comments: 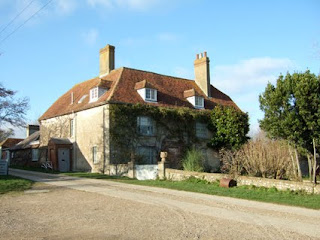 Charleston House was bought in 1916 by artists Vanessa Bell and Duncan Grant, it became the stomping ground for their friends: artists and writers who belonged to the Bloomsbury Group. The house was transformed by Bell and Grant as they decorated walls and furniture in their unique hand painted style.

I was taken up to Vanessa Bell’s Studio, at the top of Charleston House by Maggie the conservationist. She was at the head of operations, instructing volunteers in the art of cleaning and dusting old textiles and other precious objects in the house. This time of year is when all National Trust Houses are, what is called in the business, “put to bed”. An opportunity to clean everything in the house before it is re-opened in the new year. Things that had been cleaned were covered in tissue paper and white cotton sheets, leaving the sense of a ghost house: haunted objects lined the corridors and staircase. The dim lighting adding to the sense of an uninhabited cottage, filled with veiled memories and history but not too much dust. 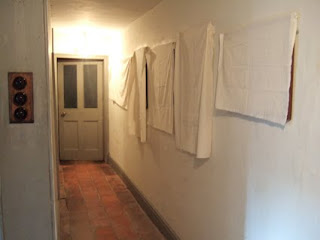 The eager volunteers hadn’t got to Vanessa Bell’s studio yet so I was hoping for the dust of some “bright young things”. I came equipped with my own dust busting kit but Maggie had the best sable brushes for the job and proceeded to dust up cobwebs, decapitated fly’s and lace wings. We moved downstairs into the dinning room, Maggie opened the curtain to this medium sized square room. The winter sun streamed into the dark room revealing a large round table at its centre, which had been hand decorated by Vanessa Bell. Maggie delicately removed dust from the table with a red velvet cloth, she had been collecting dust herself from this room. There was a piece of plastic on the table that had been attracting dust for weeks, Maggie needed to get it analysed as there were some conservation issues in the room that may have their answers lying in this pile of dust.

The National Trust is very concerned with dust, conservationists in general are. Dust is the bane of the art conservators life, one mustn’t clean too much but one mustn’t let dust settle for too long. If you do, it can stick to objects like a thin film of glue, causing a lot more damage than a regular gentle dusting.

Posted by Serena Korda at 12:27 No comments: 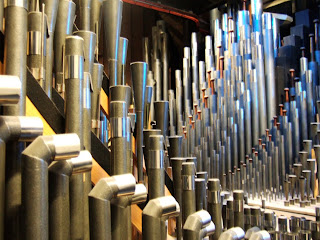 I was greeted at the stage door by a friendly receptionist, on announcing who I had come to visit he gave me a knowing look and said, ‘ah, you’re the dust lady’’. I have grown accustomed to this becoming my pseudonym over the last few weeks, as I have been getting on my hands and knees collecting dust from all over London and beyond.

Jackie the archivist was my contact and she had found me, what she thought, might be the best spot to find dust in this otherwise meticulous building in the round. She led me to an inconspicuous door on the ground floor, her key ring had a large brass disc on it with the word ORGAN engraved into it.

The door was opened and I was invited in to the “Bellows Room” of the Grand Organ built over 130 years ago by Henry Willis. I was honoured to walk into the internal structure of this auspicious instrument. Intricate steep laddering led me into hard to reach corners of the organ’s 9990 pipe’s, a seemingly endless and sprawling array of cylinders of metal and wood. The space was hard to fathom and with no sense of true perspective I began to feel like I was in an Escher drawing. 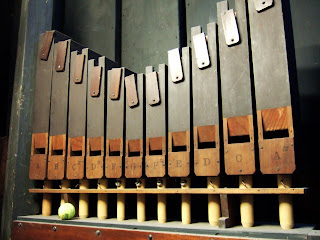 I was ecstatic over the blankets of dust that were to be found under the bellows and near the ends of pipes. My favourite dust was clinging to the back of the organs elaborate grills: delicate fibrous tentacles that glimmered in the stage lighting coming from the auditorium. 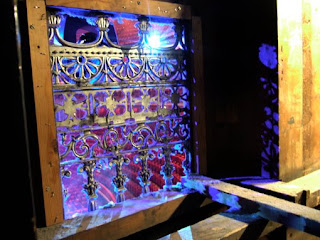 Jackie recollected an alleged piece of organ history as I delicately picked at this dust. Apparently a Suffragette had sneaked into the bellows room and installed herself in one of the pipes of the organ the night before an important political gathering in the hall. The next day she proceeded to disrupt the meeting by wailing her heart out through the pipe, transmitting dark moans in to the auditorium. 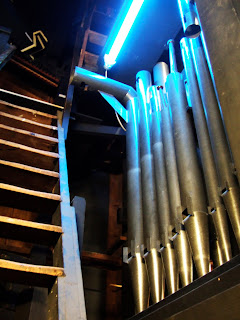 As I collected dust Jackie told me more about her role at the Hall, as the archivist she is cataloguing over 20,000 show programmes that have been made since the Hall opened in 1871. As well as this she has been collecting ghost stories of the R.A.H: accounts from staff of sightings in and around the building. Apparently when the organ was being refurbished in the 1940’s builders who had taken out the original staircase had seen an apparition walking up and down where the stairs had once been. The figure was wearing a skull cap and was thought to be a disgruntled Henry Willis, upset at his Grand Organ being disturbed. 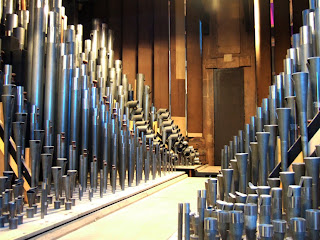 As we climbed the layers of the organ, dust dispersed and appeared to get thinner as we reached its upper most echelons.

Posted by Serena Korda at 11:12 No comments: